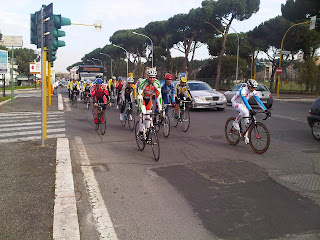 I must be in the modern part of the city since I don't see any old churches or tourists. However, there are lots of bicyclists out, and unlike Copenhagen where almost everyone rides old style bikes to work, in Rome the riders dress like competing fashion models atop their carbon fiber speed machines.
Posted by Scalawag at 1:10 AM No comments: 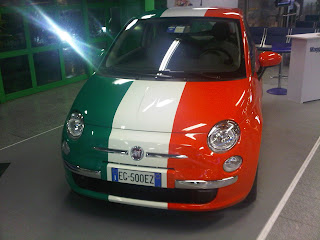 I flew to Milan today for the last of the back-to-back trips I have been doing since Jan. Nothing is simple though, so tonight I am flying to Rome instead of staying the night in Milan, which will add another city to this crazy EMEA tour. Since I only went to the SAP office in Milan which is not photogenic, I took a picture of this oh-so-Italian Fiat as the photo documentation of my time here. If I signed up for a credit card I would have been entered into a drawing to win the car. On to Roma!
Posted by Scalawag at 12:13 PM No comments: 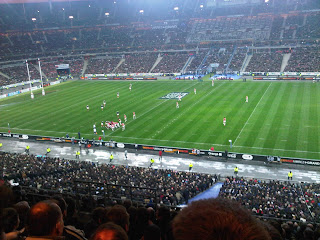 France vs Wales for the European championship. France is currently up 6 - 3 and the crowd is doing full stadium "waves"! Allez Les Blues!!
Posted by Scalawag at 4:22 PM No comments: 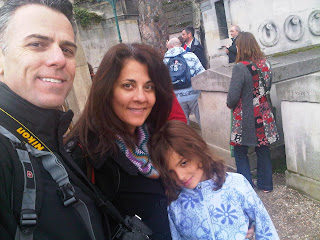 The are lots of cool people celebrating here, and a distinctly sweet smelling smoke in the air.....
Posted by Scalawag at 6:40 AM No comments: 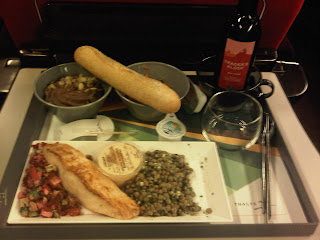 I am riding the train back from Belgium at 300 kph, and enjoying a fine meal. Well, not so fine, but better than McDonald's!
Posted by Scalawag at 11:18 AM No comments: 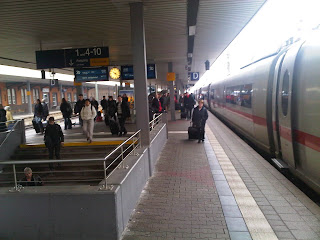 This week I am traveling by train which is quite enjoyable. It goes 300 km per hour and has twice the space around the seats as an airplane.
Posted by Scalawag at 2:51 AM No comments: 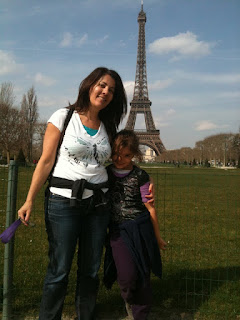 We are enjoying a beautiful spring day in Paris - 60 degrees and sunny!

Posted by Scalawag at 5:13 AM No comments: 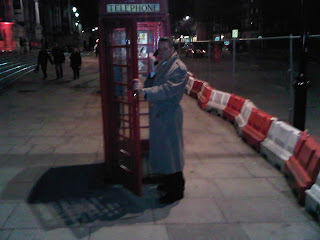 I took this shot for my nephews who were speculating about the nature of my business. I am making a call from a British pay phone in a trench coat, and that should tell you all you need to know!
Posted by Scalawag at 7:53 AM No comments: 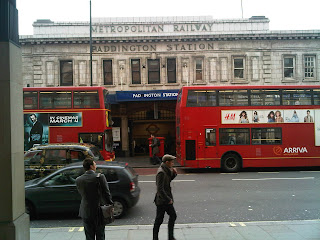 Double decker buses and the Underground.......I must be back in London!
Posted by Scalawag at 12:49 AM No comments: 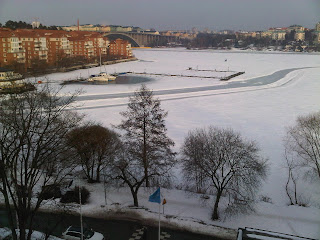 Here is the view outside the SAP office in Stockholm. The ice is about 30 to 40 cm thick, and the path you see through the snow atop the ice is used for long distance ice skating races. You might wonder why the boats are in clear water and not locked in ice. Apparently those boats belong to the owners of the restaurant to the left and they use sophisticated bubbling systems to prevent any ice from forming around their boats. I'm glad we don't have to worry about such issues in SF!
Posted by Scalawag at 1:03 PM No comments: 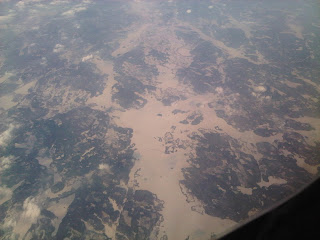 I am on my way to Stockholm and saw this view of Sweden out the airplane window. There sure are a lot of frozen lakes and snow!
Posted by Scalawag at 4:40 AM No comments:

The ocean is frozen 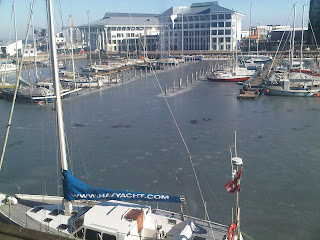 I have returned to Copenhagen where I visited last year. At that time the locals told me that the harbor rarely freezes, but it did then for the first time in years. Well, this year it is frozen solid again. Hello, global warming!
Posted by Scalawag at 2:09 AM No comments: 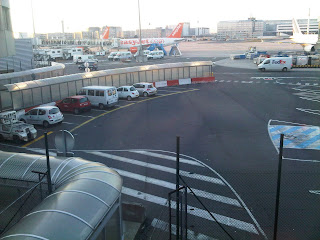 For the faithful followers of our blog (all three of you), you will recognize this shot as very similar to one I took last Tuesday on the way to Russia. There was horrendous traffic in Paris again, I missed my flight again, I am waiting for the next flight at a restaurant called "Hippopotamus" again, and I am sitting at the same table again. The only difference is that I ordered a salad instead of a burger to slow my fast march to becoming the spokes-Hippo for this restaurant.
Posted by Scalawag at 9:32 AM No comments:

Hello All,
I posted some more photos of the trip to Moscow here. They were taken from my blackberry, so the quality is not great, but they do give you a general idea of the place.
Posted by Scalawag at 12:29 AM No comments: 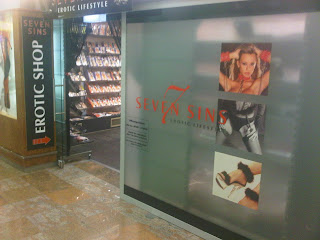 As I depart my first visit to Russia, I thought I would share a few observations.

Red Square has nothing to do with the commies. "Red" in Russian means "beautiful", and the square was called that for hundreds of years before the commies showed up in the last century.

However, when the commies arrived they blew up about half the churches, so Moscow does not have nearly as many as you see in other European countries. The ones that remain are extremely ornate, though.

The Kremlin is actually the original walled city from when Moscow was founded about 850 years ago. It is huge and looks much like other old walled cities in Europe, except better maintained.

The KGB building sits outside the walled city of the Kremlin, and it is not beautiful.

Russia has fully embraced capitalism, and in many ways is more capitalistic than the US. You can buy anything from anywhere in the world in Moscow. Also, a local colleague of mine bought his apartment with cash, and the biggest issue was the bulk and weight of transferring that many bills.

While vodka is very popular, there is zero tolerance for drinking and driving, even one beverage. The breathalyzers used by the police are cheap and inaccurate, so locals carry better models in their cars for when they are stopped and the police breathalyzer thinks they have been drinking, they can prove otherwise.

Other than drinking, if you are stopped for a traffic offense you can still settled the matter for cash immediately with the police. We also managed to park in an elite government lot right next to Red Square by offering the same cash incentive to the attendant.

Moscow has been named the most expensive city on the planet. I found this to be true as a club sandwich, beer, and dessert at my hotel cost over $110.

I did not see any bears, but I did see lots of fur - in coats on the women and hats on the men. Of course, the high temperature last week was zero degrees F, so it makes sense. 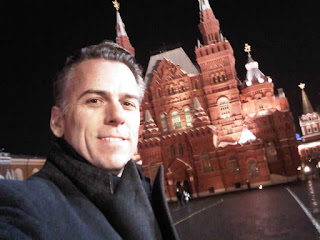 Smile, Comrade!
Posted by Scalawag at 1:01 PM No comments: 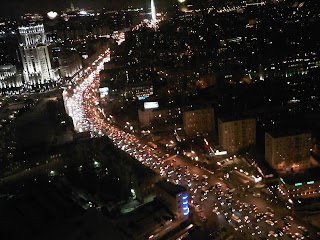 Posted by Scalawag at 9:27 AM No comments:

Back in the USSR 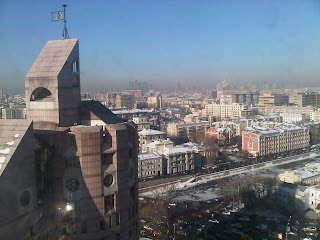 After a six hour layover in Vienna, which by the way has the swankiest shopping I have seen in an airport, I finally made it to Moscow early this morning. This is a view outside my hotel room toward downtown.
Posted by Scalawag at 11:39 PM No comments:

Another airport, another delay 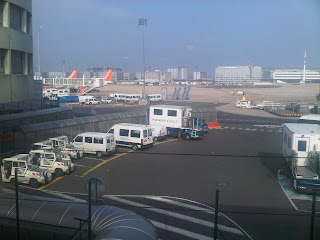 I am waiting at CDG for a flight to Vienna, then Moscow. Total delays today will be about 8 to 9 hours (so far). Ahh, the glamour of international business!
Posted by Scalawag at 2:29 AM No comments: